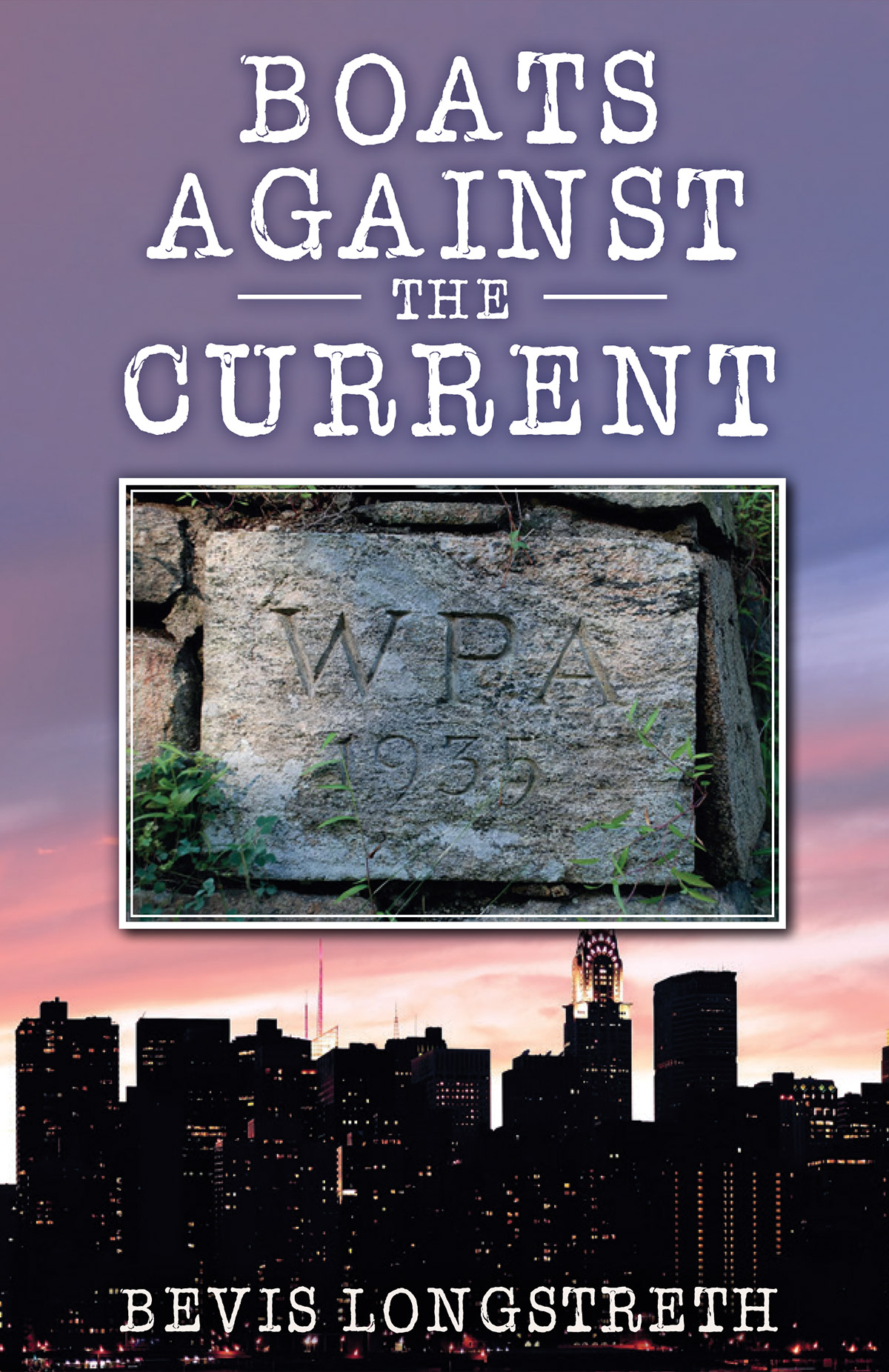 About Boats Against the Current

In luminous prose, this historical novel charts the struggles of six unforgettable lives braided together in the Great Depression, with FDR's New Deal and its Works Progress Administration serving as armature for the story.

Adam and Benno Murdock are twins of a deceased mother and Dan Murdock, a cattleman from Kansas. Each in his own way comes to terms with the politics of their father, who hates FDR and uses nationwide radio to attack the New Deal.

After law school, Adam is hired by Harry Hopkins, head of WPA. Benno becomes a sculptor, declines college and, rejected by Dan, moves to New York City, where he suffers poverty and unemployment.

The twins meet and engage in ways universal with Mariah Massie, from an aristocratic family in Richmond, Virginia, and Violet Long, a vocal and acting talent who escapes to New York City from the dusters of Dalhart, Texas. Rachel Bernstein, an Austrian psychiatrist who lands in Kansas, helps the twins come of age.

These fictional characters blend with many historical figures, including Hallie Flanagan, head of the WPA's famous Theatre Project, Huey Long, the tyrant from Louisiana, and William Allen White, the editor and owner of The Emporia Gazette in Kansas.

Praise for Boats Against the Current

Longstreth deftly blends historical figures with fictional characters in a compelling tale set against the backdrop of the Great Depression and FDR's New Deal. The narrative is lively and heartfelt, the lead players are richly observed, and there's the added surprise of how many of the novel's issues resonate in today's political climate. A provocative, trenchant novel that left me demanding a sequel.
—Dominique Browning, literary critic and head of Mom's Clean Airforce

If you think the current political turmoil is a first, perhaps you ought to read Bevis Longstreth's new book about the blood sport between FDR's followers and his conservative enemies during the Depression. The setting chosen by the author to dramatize this battle was the Works Projects Administration (WPA), the biggest New Deal program initiated by Roosevelt.

Longstreth was a member of the Securities Exchange Commission for several years in the 1980's and he knows his way around Washington so the historical highlights of the WPA, the Dust Bowl, the Veterans' March on Washington in 1932, and massive unemployment come to light in vivid detail. The story of the twins, their girlfriends, their father, and an errant female psychiatrist take a few strange turns, complete with some wayward sex, early signs of feminism, and more than enough ambiguity to fuel a sequel. A great read.
—John Doyle, rare book dealer

Boats Against the Current is historical fiction at its best. Longstreth has created an entertaining tapestry of characters and history that is difficult to put down; the more I read, the more I cared about the characters. Longstreth's style is a well crafted amalgam of erudite history and flowing and easy to read fiction prose.

The author's exceptional intellect and accumulated personal wisdom, as expressed in the philosophical musings of many of the characters, pervades the entire book. It is full of numerous discerning psychological insights along with nuanced portrayals of the characters' internal lives. The use of the political and historical backdrop of the 1930's to illuminate some of the most critical political and economic issues that face us today makes this a timely offering. The scholarship that supports the history and details of the period are particularly impressive.
—Steven Bloom, investment manager

Historical fiction at its best reminds us, in surprising and moving ways, how our pasts bear on our present. In Boats Against the Current, Bevis Longstreth has used history as a springboard for his imagination, asking us to return to America in the 1930s. He paints such a clear-eyed, intelligent, and generous picture of that world and the people who populated it that we return to our own present-day world reoriented and recharged. As it turns out, if we don't learn from our histories, political and personal, we are doomed to repeat them. This is a rigorous and often heartbreaking look at our shared histories as well as a call to do something about our shared future.
—Karen Shepard, author of An Empire of Women, The Bad Boy's Wife, and Don't I Know You?

Mr. Longstreth is a master at historical fiction which allows us to understand how our past appeared and was lived. He brings his characters to life, reminds us that the more things change the more they remain the same, and shows us that history is not made by "forces" beyond our control but by our own choices, values, and courage. You will not regret reading this one.
—Bob Kerrey, former President, The New School

In Boats Against the Current, I was able to fashion tales out of the history of the Great Depression, an event that gave rise to many stories now forgotten. FDR's Works Progress Administration (WPA) is the skeletal platform on which this "coming-of-age" story rests. Dan Murdock, a widowed and quirky cattleman from Manhattan, Kansas, raises Adam and Benno, twins who grow up to hate their father's right wing politics. Both connect with the WPA: Adam as a young lawyer hired to help Harry Hopkins; Benno as a young, unemployed and impoverished sculptor in New York City, who finally lands a job carving plaques for the WPA. Demanding little imagination, the plaques depict only the three letters of the acronym and the date 1935. It was these plaques, a number of which adorn the stone wall along the road from Bear Mountain Inn up to Perkins Drive, leading to the summit of Bear Mountain, that first suggested a story about the man who carved them. One of them is pictured on the front cover of the book. On bike rides up Bear Mountain, I couldn't get them out of my mind. Who could have done those carvings. Would he be as boring as those plaques were repetitive?

One of my story's central characters is a young woman who experienced up close the Dust Bowl as it affected Dalhart, a new town in the Texas panhandle, a wheat-inspired, wheat-supported town—a town drawing farmers eager to accept the federal government's incentives to plow under nature's long-stem drought-impervious grasses in order to plant wheat. She had vocal and acting talent on offer when her nose and throat weren't filled with dust. Violet Long was her name. She flees Dalhart after history's worst duster hit the town on her 21st birthday, seeking work in New York City.

There is another young woman in the story. Mariah Massie, who leaves her home in Richmond, Virginia to attend Newton Theological Seminary. She's a self-possessed, selfish and controlling woman, embarrassed by her parents' wealth and seeking a way through religion to give it away. She lands a summer job on Huey Long's staff, finds reinforcement of her goal to end great wealth in the Kingfish's efforts to enact "Share the Wealth" legislation to cap wealth - he gave speeches condemning the richest one percent -- and ends up helping him write his autobiography, Every Man A King. Her desire for control extends to the many men in her life, of whom Adam is an important example. Between bouts of love-making, they discover irreconcilable political differences, making for a ceaselessly fraught relationship.

Long's political touch, flamboyance, braggadocian talents and persona, overall, remind one, irresistibly, of Donald Trump. And his attack on concentrations of wealth reminds one of Bernie Sanders. Long's powers of persuasion were immense. In Arkansas, he lifted up Hattie Caraway, wife of a Senator who died, leaving her in his unexpired term. She decided to run for re-election against 7 or 8 men, a hopeless prospect. Long delivered to her a shocking victory. Had he not been gunned down in 1935, who knows how the era of FDR would have changed?

For this book, my research took me to the Kansas State University library, in Manhattan, Kansas, to examine the papers of a prominent cattleman, including his correspondence with William Allen White, the owner and publisher of the famed Emporia Gazette. I also spent a week in the library of George Mason University in Fairfax, Virginia, examining the extraordinary oral history of Hallie Flanagan's Theatre Project. And, course, I spent much time in the National Archives.