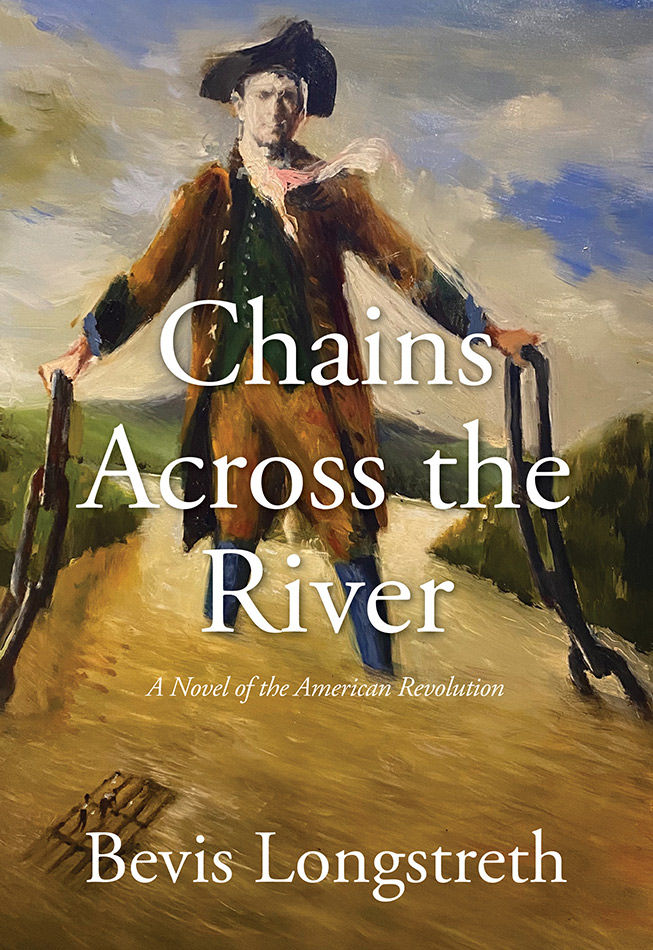 About Chains Across the River

In the Revolution, a British deserter could become a traitor to the Crown by joining the Continental Army and there become a hero. Chains Across the River tells the enthralling tale of one such soldier, Captain Thomas Machin, a brilliant engineer of flawed character born, educated and trained in England. He enlisted in the British Foot and was posted to Boston, where he saw action at Breed’s Hill before deserting to join the Continentals.

Observing Machin’s engineering skill and practical bent, Washington ordered Machin to the Hudson River, there to imagine, design and install obstructions to block the British Armada gathering in New York Harbor. Both sides believed control of the river a strategic necessity.

The immensity of Washington’s charge was matched by Machin’s audacity in imagining obstructions capable of stopping an 850-ton warship under full sail and following tide. He installed a chain at Fort Montgomery and, when the British overran that Fort and cut the chain, he installed another at West Point.

Filling out the story of Thomas Machin are the unforgettable women in his life, Elizabeth Van Horne and Caroline Filippante.

Why historians devote little attention to Machin is explained by what didn’t happen on the Hudson. The British cut the first chain without testing it and never sailed against the second. Washington and Machin understood the chain could deter without being tested. In these pages the known facts about Machin have been woven into an Homeric-like tale of daring, adventure, intrigue and triumph.

Praise for Chains Across the River

"Like the very chains that play a starring role in warding off the depredations of British ships, Longstreth’s novel deftly links the fascinating story of a tricky piece of engineering to a tale of the loves and woes and delights of some of the people who fought for American independence. A treacherous, rollicking, bone-raw colonial culture, which could so easily be lost to memory, bursts forth in these pages, as does a feel—underfoot, towering overhead—for the hazardous but seductively gorgeous lands surrounding the mighty Hudson River. Longstreth’s narrative brings to vivid life the scale of ingenuity, imagination, and daring required of the women and men who launched the courageous American experiment."
—Dominique Browning, Writer, Editor, Director of Moms Clean Air Force

"Longstreth’s Chains Across the River turns history of the American Revolution into compelling fiction. It tells a new and remarkable story of the chains strung across the Hudson to stop the British fleet from sailing upstream. A rewarding read."
— Timothy Wirth, Former Senator, Colorado

A crowded tapestry of a novel, reconstructing a critical moment in American Revolutionary history.
—Marie Winn, Author of, among others, The Plug-in Drug, Red-tails in Love and Central Park in the Dark


"Read Bevis Longstreth’s Chains Across the River not just to discover a history that you are unlikely to know, but to be moved by it. Longstreth reminds us what kinds of achievements are possible when hands, minds, and hearts come together in the name of values that are worth the fight. In a year as destabilizing and demoralizing as 2020, his reminder is a gift none of us should pass up.
—Karen Shepard, Author of, most recently, Kiss Me Someone

"In his latest novel, Chains Across the River, Bevis Longstreth has introduced readers to an almost forgotten part of the American Revolution—the attempt to build a chain across the Hudson River to block the British fleet's access to the north. Thomas Machin, a British engineer who deserted from the British to join the Americans, was the man put in charge of the project and Longstreth has set him at the center of a fascinating tale of war, love and betrayal as America fought to be free."
—Susan Carey, Book Critic and Editor

In 1968 we built a home in Garrison, New York on Putnam Ridge, overlooking the Hudson River. The river became a source of wonder and excitement for me for more than half a century, especially its role in the Revolutionary War. It was a growing desire to know more about that role that led me to write Chains Across the River.

This novel tells the story of Thomas Machin, a British-trained engineer on whom Gen. George Washington placed a huge wager in 1776 by summoning him to design, fashion and install across the mighty Hudson River between Fort Montgomery and Anthony's Nose a chain to block the Royal Navy, soon to be assembling in New York Harbor with upstream intentions. And, then, when the Fort Montgomery chain was cut by the British, to repeat this astounding accomplishment with a new chain strung between West Point and Constitution Island.

From Lake Tear in the Clouds near Mt. Marcy to New York Bay, the Hudson flows a distance of 315 miles. For some 16 miles from Newburgh Bay to Peekskill Bay, the Hudson Highlands rise high above a perilous channel known as "The Devil's Horse Race." The deepest sounding, at the southern end of Martyr's Reach opposite West Point, is 216 feet; the river's depth at Fort Montgomery is almost the same. Tides rise and fall in this stretch of river by one yard. The Highlands boast dramatic displays of gneiss and granite, etched, rounded and tossed up by the forces of glaciation during the last Ice Age.

Controlling the Hudson was considered a strategic necessity by both British and American military planners. For the British, control would force an end to the Revolution.

The threat of losing control of the Hudson to the British was palpable. In New York Bay some 200 British vessels had gathered, including a substantial share of the global British fleet of warships. The Royal Navy already controlled both Canada and the Atlantic coast. General Washington saw the Highlands as the best choke point to stop the British fleet. He assigned Thomas Machin, who he described as "an ingenious Man, the task of determining where and how to achieve that goal."

What makes the story of Thomas Machin and his chains so compelling? It is a combination of many factors. They begin with the peculiar facts of the man himself, a deserter from the British Army who, instead of boasting of this laudable migration to the Continentals, where he served with distinction, pretended throughout his life to be something else. Why would he deny facts that any man with his record would find good reason proudly to proclaim? Why did he enlist in the first place? What drove him, at enormous risk to his life, to desert? And to engage so importantly in the American battle for independence? Before doing so, had he planned to join Washington's Army? Through what means did it happen, for certainly Washington would take care in screening former British soldiers? Did the shame of being labeled a deserter outweigh the pride he could justifiably claim in joining the Continentals? Questions like this trigger my imagination, invoking a desire to complete his tale.